The famous annual fair Schueberfouer will take place from the 23rd of August until the 11th of September.
This not-to-be-missed event, which attracts every year an increasing number of people, hosts 180 organisations coming from different countries.

The Schueberfouer is a strongly rooted tradition in Luxembourg. This multifaceted event is attended by people of all ages and nationalities who spend time there having fun with the sophisticated attractions, eating at the different restaurants or just drinking a fresh beer or some good crémant in one of the stands.

… a bit of history

It is interesting to know that the origines of the fair are found back in the middle-age. Jean l’Aveugle, King of Bohème et Count of Luxembourg is the founder of the fair. The Chart of the 20th October 1340 stated: « The Fair will start each year at the eve of the St. Bartholomew festivity (24 August), and will last 8 days. »  The Schueberfouer is thus linked to the date of August 24 celebrating St. Bartholomew.

The name « Schueberfouer » derived from the first place, where the fair was held, the « Schuedbuerg » which was located on the plateau of the Holy Spirit. From « Schuedbuerg » it came to « Schuedbermiss » and then to « Schuebermëss ».  Other sources believe that there is a link with the German word « Schober » which used to mean a place to store hay.

Today the Schueberfouer, with more then 2 million visitors per edition, represents one of most important events of this sort of the Great Region and Europe.

During the Schueberfouer period all the transportation system is adapted in order to facilitate the access to the Fair.

Police forces are offering a « lost children » prevention service. This year parents will be able to register their children before going to the Schueberfouer, from Monday to Friday afternoon before 4.00 p.m. 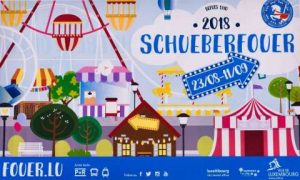 More information about Schueberfouer, amusement parks in Luxembourg and other places for having fun with children