The commune of Schuttrange was one of 24 municipalities around the country to organize a “Nuit du Sport” the beginning of June.

Zumba, badminton, Teqball, jeu de quilles, tennis, lacrosse and our very own Gaelic games were listed on the programme of sporting activities.  Eóin Mac Domhnaill and Brendan came out to show the young and not so young residents of the commune some basic hurling skills.

There was head-scratching and confused looks among the locals as the boys and girls took to the FC Munsbach soccer pitch with hurleys and sliotars, but before long even the football coach, the Bürgermeister and other members of the administration of the commune were enthusiastically passing the sliotar around.

It was a great testament to the Gaelic Sports Club Luxembourg (GCSL), which has long been a familiar and welcoming focal point for newly arrived Irish people to the Grand Duchy.

This year is the 40th anniversary of the club’s founding! Beyond that, the club has proved to be really popular with other nationalities keen to try out a new sport and make friends. 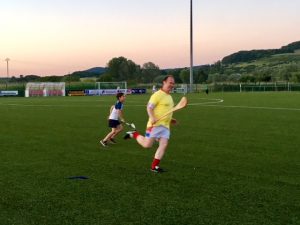 Now in its third year, GSCL’s Club na nÓg has been running hugely popular coaching sessions for kids aged between 4 and 14. This training takes place for an hour every Sunday from April to July and is run on a voluntary basis by the club members who coach, arrange refreshments for kids and parents and generally help the sessions run smoothly.

The Club competes in various European Gaelic Games tournaments that take place in cities all over Europe throughout the season and will be hosting a round of the Benelux football championship on 30th June at FC Avenir Beggen. All are welcome to come along and enjoy the games and convivial atmosphere.

In another interesting development this year, the club joined with the Luxembourg Lacrosse club and Ultimate Frisbee club to form the Luxembourg Field Sports Federation which was welcomed as a member into the Luxembourgish Olympic and Sporting Committee (COSL).

The link to the Club’s website and Facebook Group will give you access to the most up to date information on the Club’s activities. Jump over to the Our References in the Community section to get to those links.

More information about activities for children in Luxembourg : scouts, internships and colonies, having fun with children.

On Friday 29th, May 2020 (often over the weekend and following week too) Luxembourg should celebrate Nopeschfest...