Russian classes for kids and adults in Luxembourg

It’s not only kids who study Russian at the Kalinka Russian School in Luxembourg. We also have classes for adults. 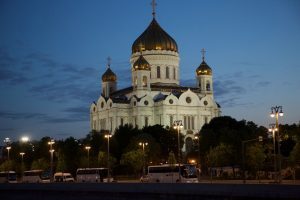 Kalinka Russian School have numerous programs of language and cultural exchange that we realize with the financial support of our main sponsor — Luxembourgish East-West United Bank. From May 19 to 27, 2018, our adult students once again went to Moscow to get more familiar with the Russian language and culture and promote Luxembourg. Our teacher of Russian as a foreign language Ekaterina Gruzova told us about this amazing trip.

Our students stayed at a hotel on Tverskaya Street, one of the famous central streets. The Luxembourgers visited the historical center – Red Square, Kremlin, Cathedral Square, Tretyakov Gallery, Grand Theatre. In the sun’s rays, the Cathedral of Christ the Savior appeared before the travelers in all its glory. Some Luxembourgers prepared a short report about the history of the temple and shared it with other members of the group while speaking in Russian. Our students climbed to the very top of the temple to see the bells and contemplate Moscow that was out in the open.The Luxembourgers also penetrated into the very depths of the city, 65 meters, or 18 floors down from the top of the ground, with subway trains overhead, into the Tangansky Protected Command Point, also known as the Bunker-42, a secret fallout shelter built in the event of an atomic attack in the 1950s.

Visiting the Museum of Cosmonautics, our travelers entered the space shuttle, but also experienced how real cosmonauts train for their missions. The huge pressure of air in the pipe in a simulator of free fall raised them high up, as the mentor’s support helped them calm down and get a real pleasure!

Promotion of Luxembourg in Russia

During stays like this one, promotion of Luxembourg and establishment of friendly relations take place in spontaneous communications. So, on the roof of the Central City Tower Business Center, with breathtaking panoramic views of the Kremlin, the Moskva River and its right bank known as Zamoskvorechye, Moscow historical center, our group dined at the Karlson Restaurant. This is there that the Luxembourgers met with Russian students and told them a lot of interesting things about the Grand Duchy. One member of our delegation even tried to compose some poetry for one of the girls and quoted to her a poem of Alexander Pushkin considered to be the greatest Russian poet. That made a wonderful impression on her and other Russian students and was a real moment of intercultural delight!

Moscow never sleeps and offers countless dance floors and clubs, so the evenings were lively and cheerful. The dinner on the Radisson Royal Flotilla boat was just delightful, because you could go to the deck and enjoy the sunset and night Moscow from the river. For a moment of relax, the Luxembourgers went to the real Russian sauna to get warmed up with birch and oak twigs, try some pickled cucumbers, cabbage and Russian vodka, as well as a juicy hot shish kebab. After visiting the Old Moscow Circus, many students said that they had never seen anything like it in their life!

Moscow, sunny weather, smiles, the eve of the World Cup and its festival atmosphere were transferred to the Luxembourgers who have kept this joy and will never forget it! The trip was highly successful!

If you are interested about Russian language classes visit the Kalinka web site.

Are you interested in language courses in Luxembourg for adults? More information here.

On Friday 29th, May 2020 (often over the weekend and following week too) Luxembourg should celebrate Nopeschfest...