Kalinka Russian School is a leading Russian school in the Grand Duchy that promotes the Russian language and Russian culture in Luxembourg. The Kalinka school also promotes the Grand Duchy as it reaches out to a large public in many countries through participation in numerous international conferences, competitions, cultural and educational projects.

The best example is a new program of language and cultural exchange launched by Kalinka and the Novye Veshki International Gymnasium in Moscow.  Last April, seven Luxembourg students aged 11 to 12 years and studying Russian, went to Moscow with the purpose of improving their Russian by a full immersion that is the always best way to learn a foreign language.

As a non-official goodwill ambassador for Luxembourg, Kalinka‘s delegation made in Moscow a presentation of Luxembourg, its educational system, rich historical heritage, modern technology-based and innovation-based economy, as well as its multicultural society, welcoming about 170 nationalities, and its know-how in integration with tolerance to the native language and traditions of newcomers.

The exchange between the students was rich and allowed to the Luxembourgish students to learn about a different educational model. 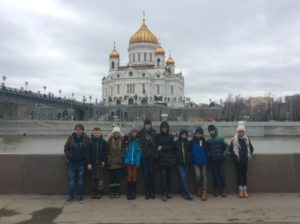 They learned that classes in Russia start at 9:00 AM and finish at 18:00 PM, with many breaks of 15-20 minutes.
In the Novye Veshki International Gymnasium there are four meals a day in the school canteen and a special rest areas with bean bag chairs and inflatable mattresses to have a rest or a sleep during the school day. The lessons seemed very interesting. The study programme provides a high-level education in the exact and natural sciences. For example, the Gymnasium holds joint lessons of physics and music, offers workshops on robotics, organizes scientific conferences for students who prepare their reports. In a joint lesson of physics and music, the Luxembourgers were using special tubes to play different musical notes.

The goal of the lesson was to develop a sense of rhythm, as well as creative thinking, as any physical object can be used as a musical instrument. Such activities show kids interconnected phenomena, do not let them get bored, and turn learning into a creative process. This approach distinguishes the Gymnasium from many other schools in Russia or abroad.

The Kalinka Russian School and the Novye Veshki International Gymnasium are going to continue their partnership on the territory of Luxembourg. The parties are working out comfortable and flexible formats for studies, rest and experience exchange from which both sides can benefit.