Flechazo, Philotimo, Merak, Lítost, Šalabajsati, Andalogni, Sisu, Mateada, Jeong, Narichane, Wabi Sabi, Teckiit, Waffart, Besa … Wondering the meaning of these words? We asked expats to indicate words of their language that will be very difficult to translate word-for-word in another language.

The words mentioned above express a particular feeling, a custom, a specific natural landscape, a typical attitude linked to the culture to which they belong to.  Each national will know perfectly their meaning-essence but when it comes to the translation things get complicated. A translation word-by-word will be impossible; a phrase will be necessary to get closer to the sense of the word.
Yet, another solution to capture the words-essence can be foreseen : visualize the meaning through a drawing.

The New-Zeland based artist Anyana Iyer took this chance !
She worked on a project called « Found in Translation » to illustrate words found in foreign languages that cannot be Anglicised or anyway translated word-for-word.
She represented a series of words  found in Adam Jacot de Boinod’s books. 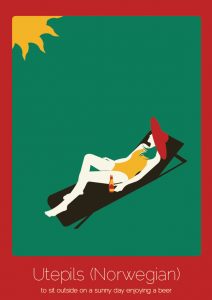 Adam Jacot de Boinod is the author of The Meaning of Tingo and Other Extraordinary Words from around the World, published by Penguin Books.

We invite you to discover the drawings of Anyana and decide if  you agree with drawing interpretation of words that she proposes ?

How would you draw the not-easy-to-transalte-words that the JAA ambassadors have listed in their portraits pages. So let’s go and play !

Zsuzsa, Hungary
“Andalogni” – to walk slowly, without a specific goal, in a rather romantic mood, not at all stressed or in a hurry.

Venci, Bulgaria
“Narichane”. It is a word that is really difficult to translate. But briefly it means to say sweet words, to make wishes for health, prosperity or love by speaking directly to someone – it is linked to the ancient Bulgarian traditions and has a somewhat magical meaning and mystical.

Malina,  Croatia
» Šalabajsati  » – which would be a regional word for wondering around and hanging-out with friends often perceived by adults as an activity with no meaning or point.

Djenita, Bosnia
« Merack » –  It is a very positive and powerful word, which reflects a lot of emotions and shades of pleasure, good mood and inner harmony with ourselves.

Stamatis, Greece
« Philotimo « , litterarly « love of honor » but it is impossible to translate since it indicates a great array of virtues ;

Carola, Spain
« Flechazo ». It’s similar to coup de foudre. It’s these emotion you feel when you suddenly fall in love with someone or something that causes a deep positive shake at all your senses.

Sirkaa, Finland
“Sisu” has been translated as guts but it’s just one aspect of the word not the whole meaning as the whole concept is just very typical feature in the Finnish mindset that simply cannot be fully translated. 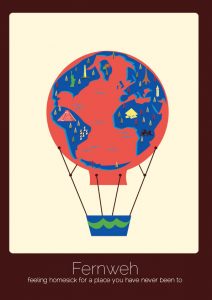 Natalia, Argentina
« Mateada » –  it is a meeting in which several people come together to drink mate instead of tea. It is a moment for sharing, much philosophy, and we drink liters and liters of water.

Samah, Egypt
« Waffart »  – It is a teasingly a funny term used when you offer something, or food to someone and he/she declines to take it, Waffart means: “great, this way you have spared me so much money I was about to spend on you.”

Aws, Iraq
« Teckiit » –  When you enter in a restaurant you like the food and you pay for people who are sitting in the restaurant.

Orie,  South Korea
“Jeong” –  Jeong is feeling of love and sympathy which is acquired from long-time relationship.

Nanako,  Japan
« Wabi sabi »  – which is a concept meaning, one could say, “wisdom in natural simplicity », or express “flawed beauty » in art.

Vilma, Albania
Besa is an Albanian cultural precept, usually translated as “faith”, that means “to keep the promise” and “word of honor ».