The Detsky KinoMay Children’s Charitable Foundation is a public organization, promoting since 2009 the best Russian films for children and youth.

Film events are accompanied by a very diverse cultural and educational program, including creative contests, meetings of cinematographers with spectators and workshops held as its part.

This year the festival will be held in Luxembourg for the fourth time and will receive talented «star volunteers» as Honored Worker of the Arts of the City of Moscow Alexander Koltsov, actresses
Marina Kudelinskaya and Irina Lindt, director Anna Bagmet, children’s writer Anna Ignatova, director, scriptwriter and singer-songwriter Alexey Levshin.

Just before the film forum, there has been a traditional writing contest for Russianspeaking children residing in Luxembourg. This year the topic of essays is «The Magic World of Theater». The contest winners will be awarded with memorable prizes and gifts at the Embassy of Russia in Luxembourg on June 14.

On June 15, a rich program of cultural activities and events will be provided at the Kalinka Russian School, with film screenings and workshops — acting, vocal, literary, as well as workshops on Russian toy-making and on clay modeling.

On June 16, the KinoMay delegation will visit German Trier, where the creative team will be received by two Russian cultural clubs and the Matryoshka Russian School. Spectators will watch feature films «Eins, zwei, drei…» and «Heavenly Camel», and then will discuss them and ask questions to the star guests. 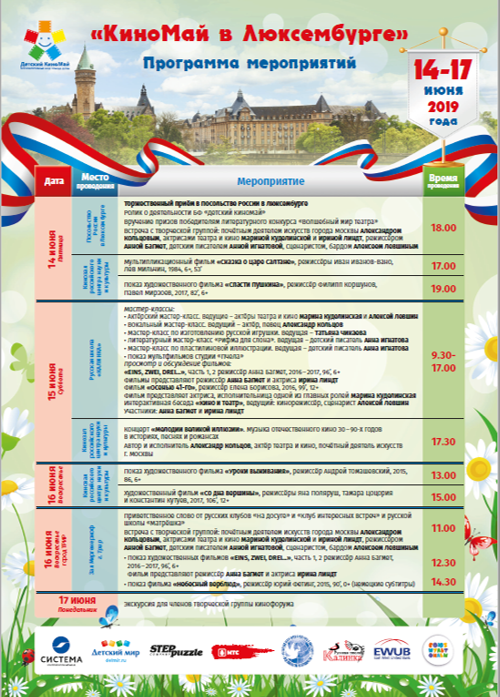